Celebrating our 8th birthday in lockdown

Despite it feeling no time at all since we last celebrated a birthday, Aberfield is celebrating turning 8 years old!

Last year saw the team head to Manchester as part of the company’s birthday festivities but as we’re currently unable to be together to celebrate our birthday, we have been reflecting this week on not only on our favourite memories of our time with Aberfield so far, but on the Positive Influence inherent within those memories.

In both our work and our internal culture, focusing on people and not just numbers, has been our driving force. Whether we’re driving fantastic results for clients, influencing end audiences or ensuring that we continue to thrive as a team during these difficult times, we’re guided by our Positive Influence approach.

First up is Beth Chaplow whose favourite memory is her work with The Jockey Club over the summer last year. Aberfield assisted on a PR, social media and influencer campaign to promote Newmarket Racecourse’s July Course, and the team were kindly invited down to the racecourse during its Moet & Chandon July Festival. They had a fantastic time meeting the influencers that they’d worked with on the campaign and it was great for the team to see all their hard work in action.

PR Consultant Becca Farnsworth cites Aberfield’s community outreach as part of their work with TV Licensing is one of her Aberfield highlights. From sight service groups to university welcome weekends, being able to visit support groups across the North to offer them help and guidance is a very rewarding task and we’re looking forward to getting back into the community when we can.

For Ian Briggs, Aberfield’s 2019 birthday trip to Manchester was a standout moment. Teamwork and leadership skills were put to the test when the team took on the Crystal Maze and luckily everyone managed to come out unscathed! After being tried both physically and mentally, the team enjoyed some well-deserved drinks at Albert’s Schloss before heading back to God’s Own Country.

Working on the York Central brownfield regeneration project, briefing over 50 stakeholder groups and receiving over 6,000 public responses was a fantastic project for Katie Wadsworth and the team to be a part of. The impact of the project, particularly receiving such a high level of public support in a scheme of York Central’s size and complexity, helped to cement the importance of our Positive Influence approach

Aberfield director Tim Downs fondly recalls Aberfield being crowned both Best Small Consultancy and Best Consultancy at the 2016 CIPR Yorkshire and Lincolnshire awards. The team made sure to celebrate in style, as it was the first time that an agency had won both awards in the same year. Knowing that we were now record holders was almost enough to justify the next day’s killer hangover…

Working on the MindMate campaign is Laura Cavanagh’s highlight of her time with Aberfield so far. We delivered an offline PR campaign to raise awareness of the mental health support services available to young people in Leeds. A standout moment of the campaign was embarking on a tour of the city in a bright orange 70s style campervan named Dougal. It was a really rewarding project to be a part of, and we were chuffed to see our work recognised after MindMate won Best Public Sector Campaign at the latest CIPR PRide awards.

Speaking of the CIPR PRide awards, Lucy Bristow’s favourite memory so far is attending the bash in November alongside the rest of the Aberfield team. The ceremony was lovely and was made even better after we picked up two awards for our work on our Grow Yorkshire and MindMate campaigns. The highlight of the night was seeing our good friend and colleague Laura Cavanagh win the award for outstanding young communicator, which was extremely well deserved.

While we can’t all be together to celebrate our birthday this year, we’ve still loved reminiscing as a team about our favourite memories and look forward to the more that will come. And we’re sure we’ll make up for the missed festivities with lots of cake once we’re back in the office!

Happy 8th Birthday to Aberfield Communications, and here’s to many more years of hard work, positive influence, team spirit and most importantly, fun. 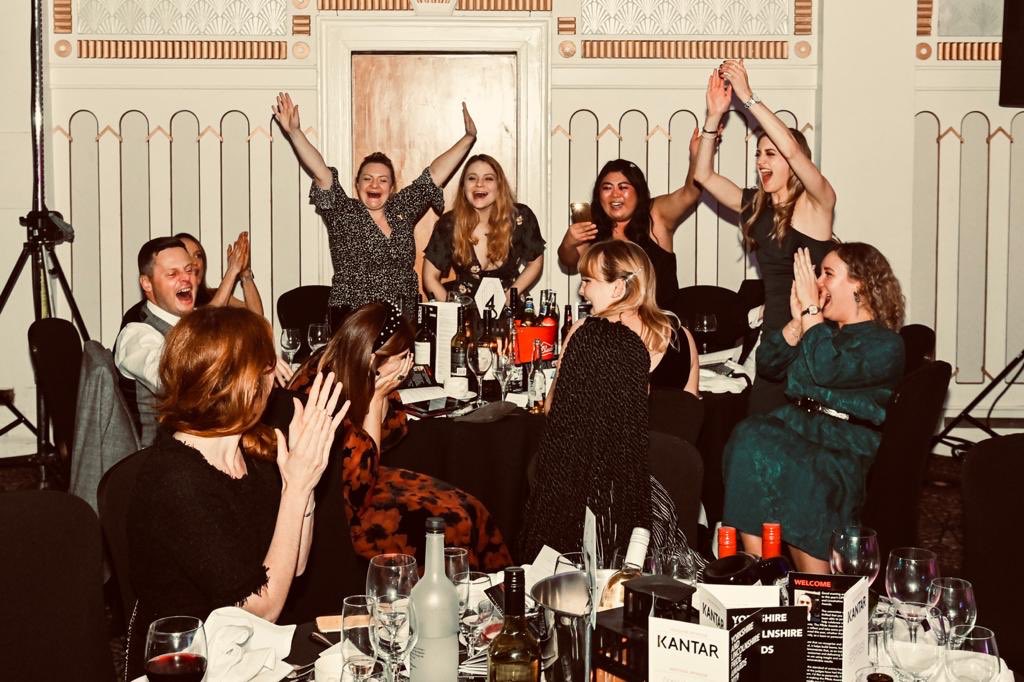